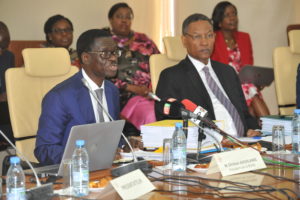 After approving the report of its 107th meeting held on 13 December 2017 in Dakar (Senegal) the Board reviewed the Bank’s statement of accounts for the year ended 31 December 2017, which will be submitted to the WAMU Council of Ministers for approval.

The Board also approved new operations including fifteen medium and long-term loans totaling XOF190 billion and an equity investment of XOF5 billion. These operations bring total investments (all operations combined) to XOF5,109.8 billion, since the beginning of its activities.

Approved commitments involve the partial financing for the following projects:

The Board also approved the cancellation of two loans previously granted to the Bank, to replace new credit facilities. These include:

The Board expressed favorable opinion on the Bank’s 2017 annual report, the statement of recovery of BOAD loans as at 28 February 2018 and the overall statement of loan recovery as at 31 December 2017, as well as the proposed updating of BOAD’s equity investment strategy.

The Board also took note of the following items:

In his closing remarks, Mr. Christian Adovelande, on behalf of the Board of Directors, sincerely thanked the Senegalese authorities and the Governor of BCEAO, for the warm and fraternal welcome extended to the Directors, as well as for the material arrangements that facilitated the organization of this meeting under congenial conditions.