BOAD held an Information Day on its environmental and climate initiatives 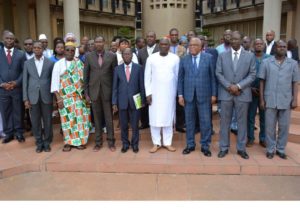 Lomé, 16 June 2017– The West African Development Bank (BOAD) held an Information Day on its environmental and climate initiatives. The event was opened by Messrs. André Johnson, Minister of Environment and Forest Resources of Togo, and Bassary Touré, Vice-President of BOAD, and was attended by about fifty participants, representing the National Environmental Agency (ANGE), government agencies, the university of Lomé, NGOs, as well as private promoters working towards environmental protection.

BOAD has routinely included an environmental component as part of its investment projects since 2013. Indeed, it has outlined in its 2015-2019 strategic plan two important strategic areas concerning the environment –strengthening its leadership on environmental issues in the WAEMU region, and promoting project financing in the area of environment and climate.

BOAD received accreditation from the UNFCCC financing mechanisms, including the Climate Change Adaptation Fund, the Global Environment Facility and the Green Climate Fund. These mechanisms now provide it with the opportunity to mobilize significant resources dedicated to environment and climate.

With these accreditations, as announced by Mr. Bassary Touré, Togo will receive funding for the following projects:

–    Project for increased resilience of the vulnerable players of the agricultural sector at Mandouri involving XOF5 billion;

–    Project for the hybridization of diesel engines of multipurpose platforms with solar systems involving XOF9.72 billion;

–    Project for increased resilience of the vulnerable players of the agricultural sector involving XOF25 billion; and

In addition, BOAD headquarters is home to the first Regional Collaboration Center on the Clean Development Mechanism.

For his part, Honourable Minister André Johnson believed that “BOAD’s initiative, far from being a mere communication action, is a responsible approach and adherence to the common goal demonstrated during this Environment Month”. He also expressed satisfaction at the fact that BOAD was “one of the first African financial institutions to make the environment one of the core concerns in project financing”.

At last, Honourable Minister Johnson commended “the partnership between BOAD and Togo, materialized by abundant and beneficial operations”.

The ensuing presentations covered BOAD’s 2015-2019 Environment and Climate Strategy, its environmental, social and climate procedures, the duties and responsibilities of the Regional Collaboration Center, the climate finance activities as well as achievements and outlook.