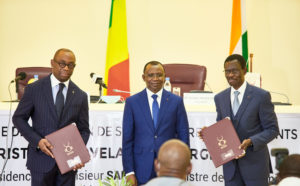 Lomé, 28 August 2020. Appointed on 18 August 2020 by the WAMU Council of Ministers, following a favourable opinion from the WAEMU Conference of Heads of State and Government, Mr. Serge Ekué, the new President of the West African Development Bank (BOAD) officially assumed office at the institution’s headquaters in Lomé (Togo) on Friday 28 August 2020, after a handover ceremony with the outgoing President, Mr. Christian Adovelande, whose term of office has drawn to a close.

Chaired by Mr. Sani Yaya, Togolese Minister of Economy and Finance and Chairperson of the Council of Ministers of the West African Monetary Union (WAMU), the ceremony was attended by Mr. Romuald Wadagni, Minister of Economy and Finance of Benin, and Mrs. Demba Tignokpa, Togolese Minister of Planning, Development and Cooperation. Were also in attendance Mr. Mamadou N’diaye, President of the Regional Council on Investments and Financial Markets (CREPMF), the representatives of the Governor of BCEAO and the President of the WAEMU Commission as well as BOAD Board members.

After 47 years of operation, including 9 years under the leadership of President Adovelande, BOAD is now one of the leading community development finance institutions in Africa. To date, it has funded in the WAEMU member countries over 1,200 projects involving a total of XOF6,235.8 billion, including 73.5% or XOF4,582 billion to the public sector and 26.5% or XOF1,653 billion to the private sector. This lending contributed to attract into the region, through co-financing, resources amounting to nearly XOF14,000 billion for a leverage effect of 2.3.

In his speech, President Christian Adovelande stated that “his mission was accomplished and things have come full circle after forty-two years at BOAD where he started his professional career back in April 1978”.

Mr. Serge Ekué, the new President of BOAD, in his address, expressed his heartfelt gratitude to the WAEMU Heads of State for his appointment to the high office of President of BOAD and warmly congratulated his predecessor for the achievements made under his leadership. Addressing the former President, he reassured him of the Bank’s future adding that: “The institution you contributed to develop will continue to grow with the opening of a new chapter in its history as intended by our founding fathers on 14 November 1973 in Dakar.”

For his part, Honourable Minister Sani Yaya, Chairperson of the WAMU Council of Ministers, pointed out that under the tenure of President Adovelande, BOAD has achieved over two-thirds (2/3) of its commitments since inception. The number of funded operations has significantly increased from an annual average of 21 operations before 2011 to an annual average of over 53 operations between 2011 and 2019. Commending him on behalf of all the members of the Council, he closed the proceedings by extending his warmest congratulations and continued success to President Serge Ekué, and reaffirming the member countries’ support and trust in the community institution.

Prior to joining BOAD, Serge Ekué had served since 2016 as Natixis’ Corporate and Investment Banking Country Manager for the UK in London. He combined this position with that of Head of Global Markets for Europe, Middle East and Africa (EMEA). In addition, Serge Ekué was previously Head for Africa and Russia Department at Natixis.

He is a graduate of Institut d’Etudes Politiques de Bordeaux, and holds a post-graduate degree in Banking & Finance from Paris V University and an Executive MBA from HEC Paris. With a sound international experience, he has been recently appointed as President of BOAD.

The West African Development Bank (BOAD) is the common development finance institution of the member countries of the West African Monetary Union (WAMU). It is an international public institution whose purpose, as provided under Article 2 of its Articles of Association, is to promote the balanced development of its member countries and foster economic integration within West Africa by financing priority development projects. It is accredited to the three climate finance facilities (GEF, AF, GCF). Since 2009, BOAD sits as an observer at the UNFCCC and actively participates in discussions on the construction of an international architecture for climate finance. It has hosted since January 2013, the first Regional Collaboration Centre (RCC) on the Clean Development Mechanism (CDM) whose aim is to provide direct support to governments, NGOs and the private sector in the identification and development of CDM projects. The Bank is committed to carbon neutrality by 2023 and is an active member of the International Development Finance Club (IDFC) which brings together 24 national, regional and bilateral development banks.