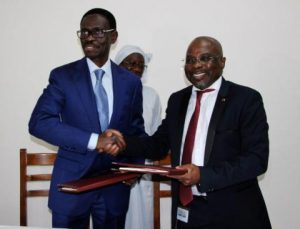 The project involves the rehabilitation of the Okpara dam and its spillways, upgrading and expansion of the water distribution networks over a total stretch of 298 km. The project will also be beneficial to the operations of SONEB. Indeed, it will consolidate and upgrade the company’s water distribution network, increase and secure its potable water production, enable it to meet the growing demand for water and improve service quality. Cashflows generated from these operations will enable SONEB to strengthen its financial position and continue to meet its financial obligations towards its financiers.

This loan agreement brings to XOF13.575 billion the total amount of funding provided by BOAD for this specific project. As part of this project, the Bank had granted a loan of XOF8 billion to the Government of Benin in March 2015.

This project is the third operation by BOAD for Benin’s urban water supply system, in addition to similar projects for Cotonou and its surrounding communities, as well as for the secondary city of Djougou and the communities of Savè, Tchaourou and Tanguiéta.

The Parakou project brings to XOF26.2 billion, the amount of loans granted by BOAD for Benin’s water sector, out of a total of XOF654 billion of funding to all sectors combined.

Mr. Christian Adovelande explained that BOAD’s support for the project is “consistent with the Bank’s intervention strategy for water and sanitation, adopted in 2010. This strategy seeks to provide water and sanitation facilities such as domestic sewage treatment plants and agricultural, industrial and solid waste management facilities in urban and rural areas.”

Mr. David Babalola, for his part, expressed satisfaction at the signing of this agreement, which will “enable SONEB to complete one of the largest water projects in the city of Parakou over the last decade”.