BOAD provides the Government of Togo with a loan totaling XOF20 billion and a XOF1.3 billion grant from the Global Environment Facility (GEF) in its capacity as implementing agency 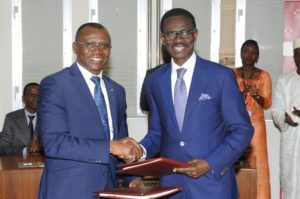 Lomé, 2 October 2018. Messrs. Christian Adovelande, President of the West African Development Bank (BOAD), and Sani Yaya, Togo’s Minister of Economy and Finance, signed two loan agreements and a grant management agreement for three projects in priority sectors for the Togolese government and people. The projects include the Togo Agrofood processing project (PTA-Togo); project for safe water supply in semi-urban centres, and the project for diesel engine hybridization of multifunctional platforms with solar systems. These projects are part of initiatives taken by the Togolese government under the 2018-2022 National Development programme, which sets out the framework for medium and long-term interventions. This programme aims at facilitating high impact growth for sustainable and equitable human development.

The Togo Agrofood processing project (PTA-TOGO) has the following objectives: (i) provision of all basic infrastructures for the Agropark; (ii) construction of two (2) dams with a total capacity of 11.16 million m3; (iii) construction of 80 kilometers of rural roads; (iv) electrification of the Broukou village hosting the Agropark; and (v) establishment of ten (10) agro processing centers or aggregation centers. Besides, supporting actions and environmental measures as well as capacity building of people and institutions are expected under this project. This project will help operationalize the country’s new agricultural strategy in a concerted and decentralized way and ensure food security as well as poverty reduction in the project area. This XOF10 billion loan granted for the implementation of this project will bring to XOF77.5 billion, the cumulative investments of BOAD in the rural development sector in Togo.

The project for supply of safe drinking water in semi-urban centres is part of the programme to supply safe drinking water to 89 semi-urban centres in Togo. These include the least covered areas, with a coverage rate of 20% compared to a national average of 50%. The project will focus on the construction of 35 drinking water systems supplying 46 semi-urban centres through the construction of: i) 5 river intakes and 48 boreholes; ii) 35 water treatment plants with a production of 28,056 m3/day of drinking water; iii) 369,459 linear meters of drinking water conveyance and distribution pipes; and iv) 39 water towers with a total capacity of 7,650 m3 supplying 546 standpipes and 700 private homes. To finance this project, BOAD granted a XOF10 billion loan facility to the Togolese government, bringing to XOF51.8 billion the cumulative investments of BOAD in the water and sanitation sector in Togo.

Finally, the diesel engine hybridization project of multifunctional platforms with solar systems involves the installation of solar photovoltaic equipment on multifunctional platforms built by the grassroots development support project (PRADEB). This project falls within the system for transparent allocation of resources of the Global Environment Facility (GEF6) for Togo. The US$2.6 million grant, equivalent to about XOF1.3 billion mobilised from GEF and managed by BOAD in its capacity as implementing agency, will help mitigate and subsidise externalities of the grassroots development support programme (PRADEB), a project approved in 2012 by BOAD for an amount of XOF6 billion.

In line with the ratification of the Paris Agreement on climate change and the adoption of the 17 sustainable development goals by the Togolese government, the implementation of this project will contribute to: (i) increased access of fifty (50) villages of Togo to electricity and clean and modern energy services by developing and using solar energy technologies; (ii) train stakeholders of national institutions in renewable energy projects for irrigation and safe drinking water supply; (iii) train local communities in beneficiary areas in the use and maintenance of solar equipment; (iv) set up about hundred rural microenterprises in the neighborhood of the platforms; (v) avoid by 2035 the emission of 4,019,099 tons of carbon dioxide equivalent of greenhouse gases from the use of fossil fuels and thus, contributing to the implementation of Togo’s commitments under the Nationally Determined Contributions (NDC) in terms of reduction of greenhouse gas emissions.

At the end of the ceremony, Mr. Adovelande “reaffirmed BOAD’s commitment to support the Togolese government in implementing its 2018-2022 National development plan aimed at significant poverty reduction and a low-carbon and climate change resilient development”.