The 107th Board of Directors of BOAD has approved new loans totaling of XOF58.1 billion 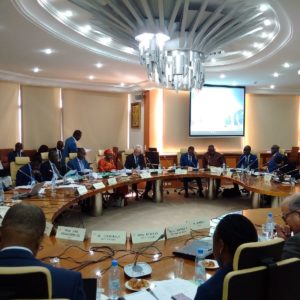 Dakar, 13 December 2017. The Board of Directors of the West African Development Bank (BOAD) held its 107th ordinary session at the headquarters of the Central Bank of West African States (BCEAO) in Dakar (Senegal) under the chairmanship of         Mr. Christian Adovelande, Chairman of the Board and President of BOAD.

The Board, after having approved the minutes of its 106th session held on 27 September 2017 in Abidjan (Côte d’Ivoire), examined and approved the 2017-2021 financial outlook update, the 2018-2020 programme-budget and the proposed renewal of the mandate of the Audit Committee members.

The Board also approved new operations, including four medium and long-term loans in a total amount of XOF40.6 billion, a short-term loan of XOF10 billion and a bond loan guarantee of XOF7.5 billion. These operations bring BOAD’s total commitments (all operations included) to XOF4,921.4 billion.

Loans approved were meant for the p artial funding of the following projects:

The Board also delivered a favorable opinion on the statement of recovery of BOAD loans as at 30 November 2017. They also took note of the following items:

In closing the session, the Board Chairman, Mr. Christian Adovelande, on behalf of the Board of Directors, thanked the Senegalese authorities and the Governor of BCEAO for the warm and brotherly hospitality extended to the Board members, as well as for the logistic and organizational arrangements that facilitated the holding of this session under congenial conditions.