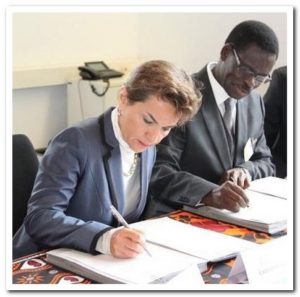 Since 2009, the West African Development Bank (BOAD) sits as an observer at the United Nations Framework Convention on Climate Change (UNFCCC) and actively participates in deliberations aiming at building a global climate finance architecture. The Bank was accredited in 2011 as the first regional entity to implement the Adaptation Fund. Its accreditation was renewed in June 2016. In addition, BOAD hosts the first Regional Collaboration Centre (RCC) on Clean Development Mechanism (CDM) since January 2013 at its headquarters in Lomé. The choice of the Bank is a demonstration of international recognition of the leading role played by the Bank, on the one hand, and its initiatives in fighting against climate change, on the other.

The Regional Collaboration Centre of Lomé (RCC) is a collaboration between the West African Development Bank (BOAD) and the United Nations Framework Convention on Climate Change (UNFCCC) Secretariat whose aim is to, first and foremost, support governments, non-governmental organizations (NGOs) and the private sector in preparing and implementing the Clean Development Mechanism (CDM) projects under the Kyoto Protocol, and secondly, work closely with countries in  the implementation of the Paris Agreement, within the framework of commitments made through their Intended Nationally Determined Contributions (INDC) , but also through other UNFCCC mechanisms.

The RCC of Lomé covers 31 African countries (Francophone African countries and all other ECOWAS member countries) and its mandate is to enhance the attractiveness and the potential of developing mitigating activities in these countries. In specific terms, the capacity building support provided by the RCC of Lomé to stakeholders covers the following areas :

The CDM is a market mechanism by which industrialized countries finance projects that contribute to the reduction of greenhouse gas emissions, enabling developing countries to achieve sustainable development through the transfer of clean technologies. GHG emission reductions from CDM projects can be traded on the carbon market through certified emission reductions units (CERs) equivalent to one tonne of CO2.

To meet countries’ needs, the RCC of Lomé implements solutions adapted to each country. It develops together with them, tools to better take into account reducing of greenhouse gas emissions of projects through the development of a sector-based Standardized Reference. For instance, in 2015, the Centre supported the West African Power Pool (WAPP) in developing its standardized reference level.

From 2013 to date, the Centre has supported more than 300 CDM-eligible projects, directly supporting more than 100 institutions and promoters of project.  It has also piloted several initiatives to support countries in their efforts to achieve the commitments made under the Paris Agreement. These include:

The core objective of the Alliance is to strengthen the participation of West African countries in international financing mechanisms, and in particular through carbon markets, which represent a considerable opportunity for financing climate action under the Paris Climate Agreement. The Alliance receives financial support in the form of donations from the German Federal Ministry in charge of Environment and Natural Conservation, from The BOAD through the RCC of Lomé serving as a technical and financial management entity.

The CI-ACA aims to promote the development of carbon price signal instruments in developing countries. The initiative is currently funded by voluntary contributions from the Governments of Germany, Norway, Switzerland and Sweden and implemented by the UNFCCC Secretariat, through the RCC of Lomé.

The establishment of this network provides technical support to ECOWAS countries within the framework of the MNV such as national communications and biennial update reports, with particular emphasis on the energy sectors and AFOLU[1]. The network assists countries and regional institutions in facilitating South-North and South-South cooperation and in the exchange of high-quality knowledge among participating countries.

On the 13th of April 2018 in Nairobi, the RCC of Lomé, the United Nations Framework Convention on Climate Change and the NGO, Jeunes Volontaires pour l’Environnement (JVE), signed a Memorandum of Understanding for the establishment of a training academy for young African elites on issues relating to climate change including the negotiation aspects as contained in climate change agreements.

The pilot phase of this initiative will take place in Lomé before COP 24 in December 2018. This pilot phase is being implemented jointly with BOAD, the University of Lomé, WASCAL and UNFCCC under the auspices of the RCC of Lomé.

The RCC mobilizes significant resources from partners and countries, especially in the framework of capacity building of countries, NGOs and promoters of projects, especially those in the private sector. Since 2013, this mobilization has made it possible to organize around hundred capacity building activities and events to support countries in their climate change needs. The Centre organized these activities with/or on behalf of many financial institutions (World Bank, ADB, KFW, etc.), multilateral institutions (UNFCCC, UNDP, UNEP, etc.) and volunteering countries sensitive to the fight against climate change (Germany, Norway, Sweden, Switzerland, Netherlands, England, etc.).

It has also supported project promoters in terms of resource mobilization for the execution of their projects, such as the bio-digester development project in Burkina Faso with the support of the Nederland’s Development Organisation (SNV) and Hivos.

Other initiatives are underway to attract more financing in the sub-region, notably the creation of the ECOWAS Climate Finance Platform and green bonds.

The core mandate of the ECOWAS Climate Finance Platform is to disseminate knowledge, advocate, support private sector investment mobilization for inclusive growth based on local expertise serving communities and coordinate for the harmonization of standards and impacts of financial outcomes (green loans and green bonds), including the development of regional capital markets (stock exchange initiatives) such as green indices and other financial instruments.

With regard to green bonds, it should be noted that the financing needs of African countries and especially those of UEMOA are enormous. Therefore, for an inclusive development of climate action by 2050, investment needs are estimated around 1.5 trillion CFA Francs per year. However, significant efforts are needed to move Africa towards universal access to energy by 2025.

In this perspective, the RCC has undertaken discussions with BOAD to mobilize available resources through the issuance of green bonds. This green bond issue will satisfy the significant green investment potential of ECOWAS, particularly in the energy sector, which requires targeted non-financial actions to allow investments mature with the support of the RCC of Lomé. BOAD has been an observer with the International Capital Market Association (ICMA) since April 2017.

The Centre will emphasis more on the implementation of tools, instruments and the institutional and regulatory framework for the effective implementation of Nationally Determined Contributions (NDCs) taking into account the Sustainable Development Goals (SDG). It intends to provide appropriate solutions to States and national entities implementing projects, programmes and policies.

The Centre would also support BOAD, other institutions and member countries to enable them to mobilize resources through carbon pricing, green bonds and especially the involvement of the domestic and international private sector. To this end, it intends to develop instruments with countries to guarantee private sector investment.

[1] AFOLU: Agriculture, Forestry and other Land Use