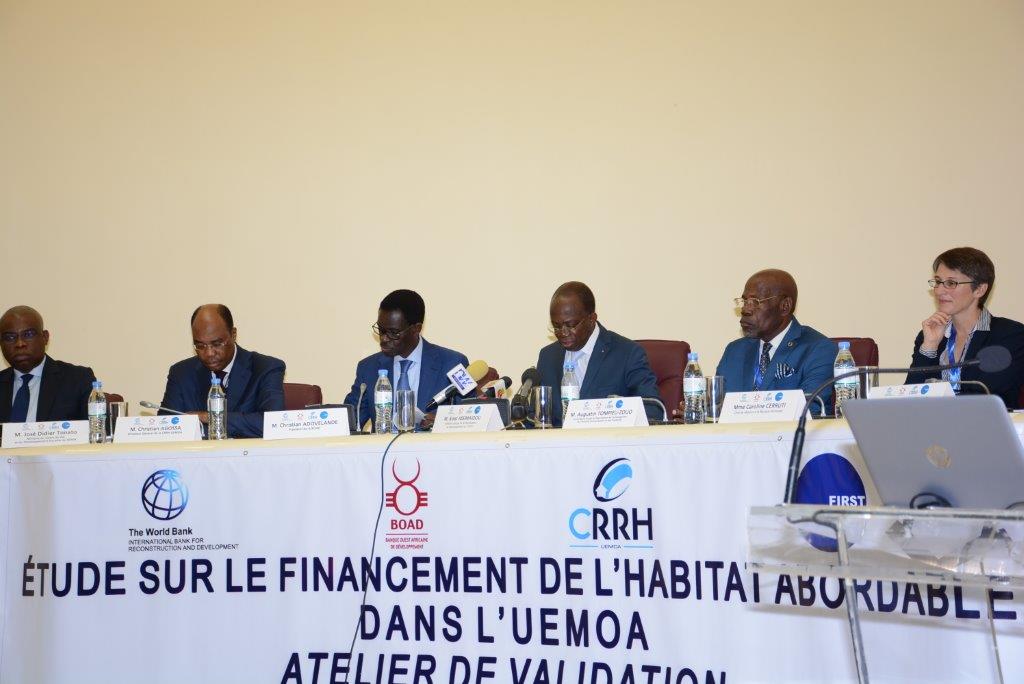 Lomé, 28 February 2017– The World Bank in conjunction with the West African Development Bank (BOAD) and the Caisse Régionale de Refinancement Hypothécaire de l’UEMOA (CRRH-UEMOA) held on Tuesday 28 February 2017 at BOAD headquarters in Lomé, a validation workshop on the study pertaining to the financing of affordable housing within the WAEMU region. This study aims to identify the best options in promoting social housing development within the community.

Based on the diagnosis of the financing situation of social housing in the WAEMU region and experiences from the different countries of the Union, regarding housing supply constraints, participants reflected on funding options by optimizing regional instruments in order to increase financing for affordable housing. Against this backdrop, international experiments were shared to facilitate the financing for affordable housing through mortgage refinancing funds.

This workshop was part of the assessment by the World Bank of a funding request submitted by the WAEMU Council of Ministers for the implementation of a regional project aimed at improving access to financing for affordable housing at the initiative of BOAD and CRRH-UEMOA.

Mr. Christian Adovelande, President of BOAD, recalled that his institution “has, in conjunction with the BCEAO, the WAEMU Commission and the Regional capital markets authority, embarked on reflections aimed at promoting a mortgage market. The inception in 2010 of CRRH-UEMOA is one of the outcomes of this community initiative. It is now appropriate to strengthen the structuring role of CRRH-UEMOA, especially in financing affordable housing”.

With a population estimated at about 110 million people, the Union has one of the highest population growth rates in the world. This rapid population growth, which is accompanied by fast-growing urbanization, has made the promotion of affordable housing an economic and social emergency.

Mr. Christian Agossa, Managing Director of CRRH-UEMOA, welcomed the shared understanding of the role that his institution can play in developing financing for affordable housing. He recalled that this target was assigned to CRRH-UEMOA from inception and the support from the World Bank Group will help make it a reality for the benefit of low or fluctuating income households.

That support from the World Bank Group was confirmed by Mrs. Joëlle Businger, World Bank Resident Representative in Togo: “We are preparing for a regional operation involving US$100 million to support efforts aimed at increasing access to financing for affordable housing in the region. This operation financed by the International Development Association (IDA) will be submitted to our Board of Directors for approval before ending of 2017”, she said.

The World Bank, BOAD and CRRH-UEMOA expressed appreciation for the quality of discussions and inputs from participants during the workshop, and reaffirmed their commitment to working towards increased financing for housing in the WAEMU region, and especially for social housing in favour of low-income populations.

The International Development Association (IDA), a World Bank institution established in 1960, provide grants and interest-free loans to the poorest countries in order to assist them in implementing projects and programs that boost economic growth, contribute towards poverty reduction and improved living conditions of poor people. IDA is one of the key donors of the 77 poorest countries in the world, 39 of which are located in Africa. In real terms, IDA resources benefit 1.3 billion people. Since inception, IDA has supported operations in 112 countries. The annual volume of commitments averaged US$19 billion over the last three years, with 50% of this amount being earmarked for Africa.

CRRH-UEMOA is one of the fruits of the close cooperation forged in 2005 by the Central Bank of West African States (BCEAO), the West African Development Bank (BOAD) and the Regional Council for investments and capital markets (CREPMF) for the implementation of a mortgage market in the WAEMU countries. Its purpose is to provide WEAMU credit institutions with long-term resources for refinancing mortgage loans extended to their customers, either through bond loan issues in the regional capital market or through mobilization of concessional resources from development partners.