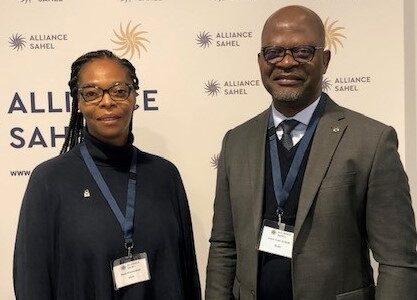 Brussels, 7 December 2022. At the 10th Operational Steering Committee meeting of the Sahel
Alliance, BOAD officially joined this community of development partners as the 27th member,
and the 18th full member.
This membership will enable the Bank to contribute to the efforts of partners operating in a
region where development challenges in terms of infrastructure, energy, food security, health
and education as well as major security, demographic and social constraints require strong
synergy of action to generate a strong impact.
The Sahel Alliance brings together the major multilateral and bilateral development partners
of the Sahel countries. It currently includes 27 members, namely France, Germany, European
Union, World Bank, African Development Bank, United Nations Development Programme,
Spain, Italy, UK, Luxembourg, Denmark, Netherlands, European Investment Bank, United
States of America, Canada, Norway and BOAD, all of which are full members.

About the Sahel Alliance:
The Sahel Alliance is an international coordination platform for the stabilization and
development of the G5 Sahel countries: Mauritania, Mali, Burkina Faso, Niger and Chad. It was
inaugurated in July 2017 in Paris, in the presence of the President of the French Republic, the
German Chancellor and the EU High Representative. The Alliance is a coordination mechanism
for development partners to provide more rapid, effective, targeted and, above all, highimpact support. Its purpose is to address the root causes of the crisis in the Sahel, by speeding
up the deployment and use of financial support and assistance. In conjunction with the G5
Sahel, it contributes to the development component of the Sahel Coalition.

About the West African Development Bank
The West African Development Bank (BOAD) is the common development finance institution
of the member countries of the West African Monetary Union (WAMU). It was established by
an agreement signed on 14 November 1973, and became operational in 1976. As an
international public institution, its purpose, as provided under Article 2 of its Articles of
Association, is to promote the balanced development of its member countries and foster
economic integration within West Africa by financing priority development projects. It is
accredited to the three climate finance facilities (GEF, AF, GCF). Since 2009, BOAD sits as an
observer at the UNFCCC and actively participates in discussions on devising an international
climate finance system. Moreover, since January 2013, it has been home to the first Regional
Collaboration Centre (RCC) on Clean Development Mechanism (CDM), whose aim is to provide
direct support to governments, NGOs and the private sector in identifying and developing
CDM projects. The Bank is committed to carbon neutrality by 2023. www.boad.org