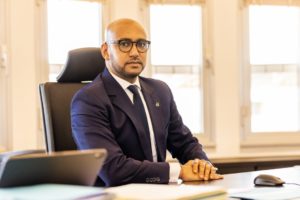 He  currently  chairs  the  Executive  Committee  of  the African  Rural  and Agricultural Credit Association (based in Nairobi, Kenya), the Board of the SICAV-Abdou Diouf, an investment fund (based in Cotonou, Benin) and dedicated  to  the  West  Africa  region.  He  is  a  board  member  of  various entities active in Africa, mainly in transport, insurance and finance.

From 2013 to 2020, he held several high positions at government level in Mali,  first,  as  Deputy  Minister  at  the  Ministry  of  Economy  and  Finance, in  charge  of  Investment  Promotion  and  Private  Sector,  then  as  Minister of  Industry  and  Investment  Promotion.  In  2015,  he  joined  the  Office  of the  President  of  the  Republic  of  Mali,  as  Deputy Secretary General  and afterwards  as  Minister,  Secretary  General,  overseeing  and  coordinating the activities of the President of Mali.

Prior to joining the civil service and government, Mr. Ben Barka worked in  the  private  sector  from  2000  to  2013.  Firstly,  in  Canada,  where  he gained substantial experience at the National Bank of Canada as Analyst, Senior  Analyst  and  Internal  Auditor  in  the  Treasury  and  Financial Markets Department.

With the resolve and willingness to returnin Africa and contribute to its development,  he  joined  in  2007  Blackpearl  Finance,  an  investment  bank based  in  Senegal,  as  a  Director  in  charge  of  project  and  structured finance.Mr.  Ben  Barka  holds  an  Executive  MBA  from Université  du  Québec  àMontréal,  a  Graduate  Certificate  from McGill  University, and  a  Bachelor degree  in  Finance  and  International  Business  from HEC Montréal.  He  is also a Fellow of the Institute of Canadian Bankers.