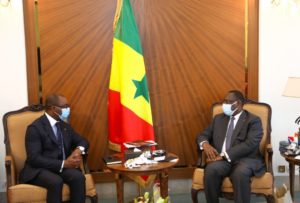 Dakar, 10 September 2020. After taking office on 28 August, the new President of the West African Development Bank (BOAD), Mr. Serge Ekué, paid an official visit to Senegal, where he was received by His Excellency Mr. Macky Sall, President of the Republic. The President expressed his sincere thanks to the President of Senegal for his appointment at the helm of BOAD, following the favorable opinion given by the WAEMU Conference of Heads of State and Government.

He also availed himself of the opportunity to seek advice and specific guidance from the Head of State with the aim of strengthening his roadmap, especially, Senegal’s priorities with regard to the financing of the country’s development projects. In addition, he reaffirmed BOAD’s commitment to continue supporting the country as part of the implementation of Emerging Senegal Plan to improve the living conditions of its people. It is worth recalling that this visit comes after the audience granted to President Serge Ekué on 28 August 2020 by His Excellency Mr. Faure Essozimna Gnassingbé, President of the Republic of Togo.

The President of BOAD paid a courtesy call to the Governor of BCEAO, Mr. Tiémoko Meyliet Koné, in order to gather the vision of BOAD’s main shareholder on the challenges related to development finance in the WAEMU region, and seek support and insight at the beginning of his term of office. This meeting, which is the first meeting held by the President of BOAD with an institution of the Union is part of the very close cooperation that has always existed between the Central Bank and BOAD.

The visit of the President of BOAD continued with a meeting with Mr. Amadou Hott, Senegalese Minister of Economy, Planning and Cooperation; this was an opportunity for both personalities to take stock of projects currently financed by BOAD as well as Senegal’s priorities, especially with regard to the financing of a number of structuring projects under the Emerging Senegal Plan (ESP) and related financing requirements.

During the meeting with Mr. Abdoulaye Daouda Diallo, Minister of Finance and Budget, the latter encouraged BOAD to continue to support Senegal, especially for the implementation of projects of the Economic and Social Response Plan to COVID-19, under which the Bank has already granted a significant contribution of XOF26.2 billion. He stressed the significant role that BOAD must continue to play in the context of the pandemic which negatively impacts several sectors of the Senegalese economy where the State must maintain efforts to mobilize budget revenues.

While in Senegal, the President of BOAD met with the Bank’s Board Directors in Senegal as well as private operators to whom he confirmed the institution’s commitment to support the promotion of the private sector, which holds an important place in the new 2021-2025 five-year plan under preparation.

All personalities visited commended the appointment of President Ekué at the head of BOAD, and assured him of their support and wished him every success during his term of office.

The West African Development Bank (BOAD) is the common development finance institution of the member countries of the West African Monetary Union (WAMU). It is an international public institution whose purpose, as provided under Article 2 of its Articles of Association, is to promote the balanced development of its member countries and foster economic integration within West Africa by financing priority development projects. It is accredited to the three climate finance facilities (GEF, AF, GCF). Since 2009, BOAD sits as an observer at the UNFCCC and actively participates in discussions on the construction of an international architecture for climate finance. It has hosted since January 2013, the first Regional Collaboration Centre (RCC) on the Clean Development Mechanism (CDM) whose aim is to provide direct support to governments, NGOs and the private sector in the identification and development of CDM projects. The Bank is committed to carbon neutrality by 2023 and is an active member of the International Development Finance Club (IDFC) which brings together 24 national, regional and bilateral development banks.